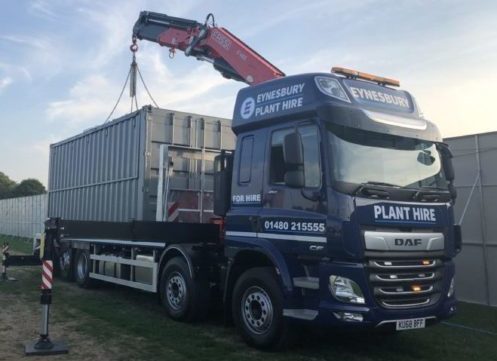 Important factors that an HGV driver must consider

Everyone’s busy.  We’re all trying to get from A to B as quickly and safely as possible. But have you ever considered the extra care that HGV drivers have to take in order for their loads to reach their destinations in one piece?

Here at Eynesbury Plant Hire we provide road haulage container contractor services, which means that a lot of our lorries are on UK roads every single day.  Although our drivers are trained to drive these heavy goods vehicles (which are up to ten times the size of an average car), with traffic on our roads constantly increasing, there are far more hazards than ever before.

With accidents involving HGVs being amongst the more serious due to the sheer size and weight of the vehicles, HGV drivers need to be far more vigilant than the average car driver.  Here’s why:

Small car drivers can park relatively easily just about anywhere.  Some won’t think about how much remaining space is required for a lorry to pass through safely.  For an HGV driver parked cars are one of the biggest obstructions when it comes to reaching their destination safely.  Cars parked near to, or opposite junctions are dangerous, as a lorry’s turning circle can be seriously compromised.

Keeping a safe distance is vitally important for an HGV driver.  Due to the size and weight of the vehicle, stopping distances are hugely increased in comparison to a car.  Likewise, cars should keep a safe distance from lorries, as the length of the vehicle can make it very difficult for the driver to see any vehicles travelling behind them, even with the use of mirrors.

HGV drivers have targets to meet. They have to get their loads to their destinations on time the same as you have to get to work on time.  You’ll rarely see an HGV breaking any speed limits, but it doesn’t mean that they aren’t eager to get to where they need to be.  It just means that they’re taking every care to get there safely, to get their load there undamaged, and to make sure that you, the other drivers, aren’t in any danger from them on their journey.

Any person that drives an HGV is under strict rules to take a break after every 4.5 hours of driving.  This means they have to find safe places to stop, which can sometimes be difficult on single carriage roads.  This is why you’ll often see huge lorries parked up on roadside laybys. It’s not that they’re time wasting; they’re required by law to take regular scheduled breaks.  General consideration to and from other road users is part of an HGV driver’s training. Signalling of manoeuvres, safe driving distances and overall awareness of the road conditions will help to keep everyone safe!